Apple Picking Along With Apple Recipes

This is an article that I ran before. I love the pictures and the recipes that Laurie gave are great. It makes me homesick for Virginia!

by David Proctor and Laurie Calloway

The great thing about an apple is not only that it tastes good but is good for you.

With such a starring role it is hard to not like the apple.

When you shop for apples you will generally see just a few types, that is because the apples that consumers buy are generally just pretty apples.  Looks are more than apple-skin, deep.

Most shoppers look for the red, perfectly shaped apple.  There’s nothing wrong with that, except you may be missing out on other varieties that may not have the shelf appeal but the taste is where they shine.

You will not see some of the heirloom varieties in the stores. You have to go to orchards to find those such as the Wolf River, Newton Pippin, and the Snow just to name a few.

Some varieties are better for cooking and some for just plain eating.  It is hard to go wrong with eating an apple a day.

They are good for your gums and teeth, good for digestion and other health benefits from the nutrition they give us.

When I think of apples I really enjoy this time of year going to an apple orchard.  Around Virginia, you will find outstanding produce along with the scenery. 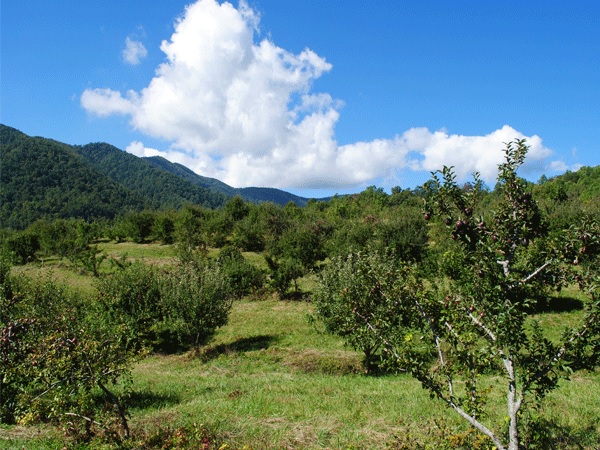 My girls and I have gone to Graves Mountain Lodge in Virginia to pick apples.  They offer “pick your own apples” fresh from the trees. Varieties include; Red Delicious, Golden Delicious, Stayman, York, Winesap, Mutsu, Fuji, Granny Smith, Rome, and Empire. 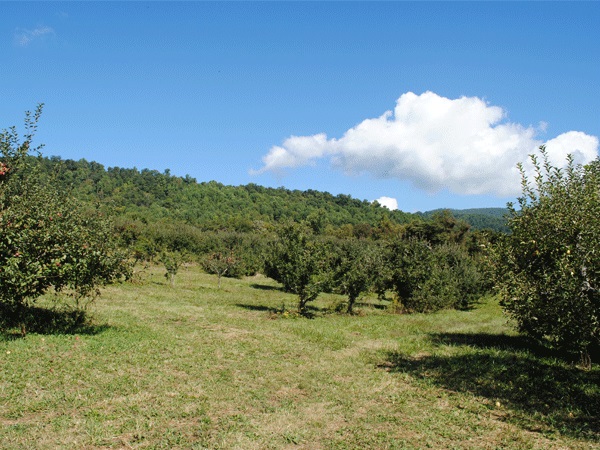 As you can see from the pictures, they have breathtaking views. If you wonder about how many to pick, a bushel of apples is about 48 pounds.

This chart gives an idea of weights.  Note: When it comes to cooking with apples, it may be helpful to know the following:

Tips for Preparing and Cooking

The skin of the apple is unusually rich in nutrients, and even if the recipe you’ve chosen requires peeled apples, consider leaving the skins on to receive the unique benefits found in the skins. 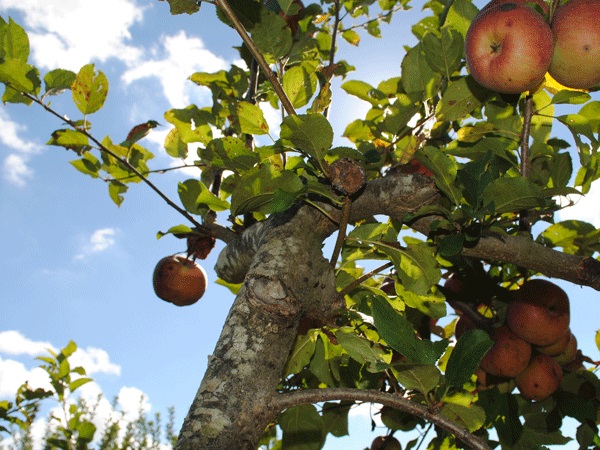 Ideally, of course, choose organic apples to avoid problems related to pesticide residues and other contaminants on the skins.

If you cannot obtain organic apples, and you are willing to accept some level of risk related to consumption of residues on the apple skins, we believe that it can still be a good trade-off between nutrients and contaminants if you leave the skin of the apple intact and eat the apple unpeeled.

Just be sure to thoroughly rinse the entire apple under a stream of pure water while gently scrubbing the skin with a natural bristle brush for 10-15 seconds.

To prevent browning when slicing apples for a recipe, simply put the slices in a bowl of cold water to which a spoonful of lemon juice has been added. For use in future recipes, sliced apples freeze well in plastic bags or containers. 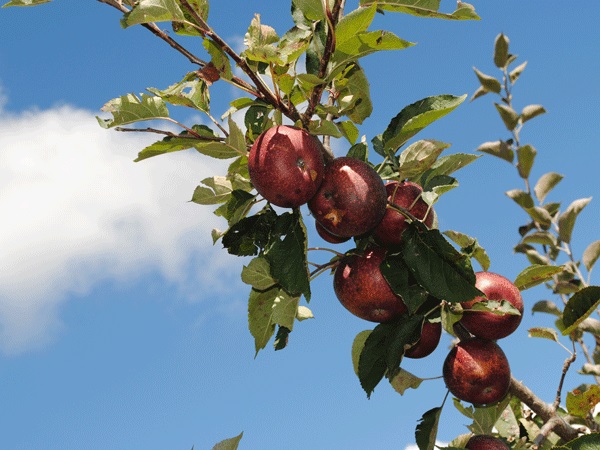 Some types of processing are easier on nutrients than others, but in general, apple sauces require boiling of apples and apple juices require some extraction of pulp.

In all cases, the more apple that can be retained, the better the resulting nourishment. Processing can take a special toll on polyphenols. We’ve seen recent studies where only 10% of the flavonols and 3% of the catechins from the original apples remained present in the processed apple juice.

Even chlorogenic acid (one of the more stable polyphenols in apples) tends to be decreased by at least 50% during the processing of whole apples into juice.

Obviously, there are exceptions to these generalized findings. For example, it is possible to put whole apples into a powerful blender and consume the resulting juice.

In this case, very little if any of the nutrients are lost. However, this type of blending is not used in the commercial production of apple juice.

Cloudy apple juices typically retain some of these pulpy solids because even though the pulpy solids have been removed from the juice through pressing and filtering, they are added back in at some designated level. 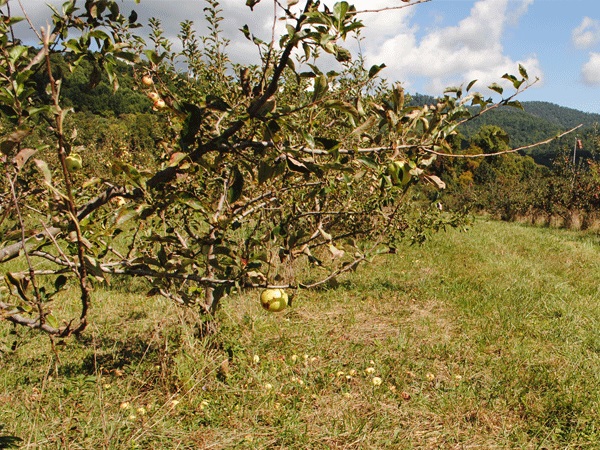 There are almost as many ways to eat an apple as there are apple varieties. What kind of apple eater are you? Compare your munching method with these apple profiles.

1. Compulsive Wedger: This apple eater can´t eat the apple whole; must have perfect, core-free wedges neatly arranged on a plate. Each wedge must equal one-eighth of an apple.

2. Splitter: This apple eater hates to deal with the core, but isn´t compulsive enough to bother with wedges − just chops the apple in half, removes the core and munches contentedly. Muscle-bound types show off their brute force by twisting the apple in half with their bare hands (though in fact it´s really not that difficult).

3. Circle Stickler: This rebellious sort slices the apple against the grain − across the core, to make round slices. She can often be found with convenient slices of cheese at hand. This person knows that round apple slices are much better than crackers!

4. Top-to-Bottom Type: This methodical muncher starts at the stem and munches all the way down to the bottom. He doesn´t change the apple´s position until one vertical top-to-bottom pass had been completed. He then rotates the apple to continue in the next lane until the whole thing is done.

5. Equator Eater: Probably the most common approach, this muncher takes bites out of the center of the apple all the way around, until the apple looks something like a mushroom on a mirror.

The nibbler then attacks the top, and finally the bottom, which is somewhat less convenient as there is no place left to hold apple without getting one´s fingers juicy − but she doesn´t mind!

6. The Streak: This eater prefers to eat his apples in the nude − the apple, that is! He does not care about what he´s been told about all those vitamins and fiber in the skin, peeling the stuff right off, preferably in one long winding piece.

Once the peeling is complete, he either eats the apple whole or sliced. The latter method is usually employed, as the apple´s skinless state can lead to copious juice drippings.

7. Core-Free Cruncher: This muncher comes in two personalities. Type B loves gadgets and small appliances. He eats a lot of apples because he gets to use that nifty “apple corer” gadget.

Type A is a seedophobic and doesn´t care whether she gets to use a gadget, knife or sharp fingernails – she just has to get those darned seeds out of there before she´ll even take one bite! The Type A personality does avoid core disposal issues, however.

8. Stem Plucker: Before the first bite, this apple muncher grabs the apple´s stem and twists, saying one letter of the alphabet with each turn.

The letter at which the stem comes off has profound meaning, usually interpreted as the first initial of the name of the future spouse. (Married munchers, take note: Turns can be modified to ensure the stem comes out at the desired letter.)

Particularly curious Stem Pluckers continue the ritual by poking the outside of the apple with the stem to determine the number of children they will have, said to be equal to the number of pokes it takes to break the skin of the apple.
(Hey, we don´t make these things up, we just reprint ´em.)

In a recent, incredibly unscientific poll, three out of four people surveyed reported themselves to be Stem Pluckers.

In any case, whether you enjoy cooking with apples, just eating apples or both, try to find the time to pick your own if you do not have your own apple tree.  The time spent outside is well worth it.

In the 1994 blockbuster movie, Forrest Gump, Forrest’s friend, Bubba, enthusiastically educated him about all the ways to prepare shrimp.  And there were quite a few!  However, if any food can rival shrimp in the number of ways it can be prepared, the many varieties of the humble apple would certainly be at the top of the list.

Most families have a favorite apple pie recipe, and more than likely, apple pies are probably the most popular way to make use of apples.  However, as delicious as they are, they can be a bit labor-intensive, especially if you prepare your own pastry for the crust.

So, if time is not on your side, here are two recipes that can be prepared fairly quickly, filling your home with the wonderful autumn aroma of cooking apples and spices in short order.

Baked Apples (This recipe can be easily doubled or tripled)

Preheat oven to 350 degrees. Wash and core apples, leaving at least a quarter to half-inch at the bottom of the apple.  (Take care not to core all the way through.) 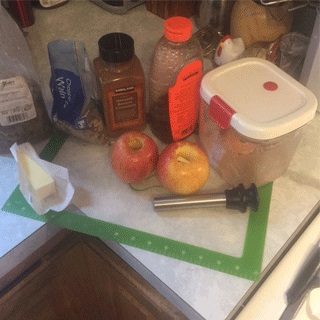 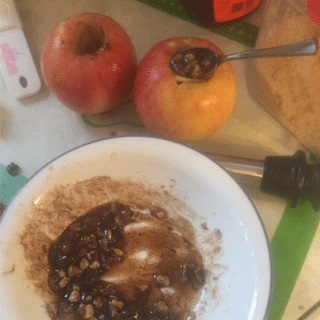 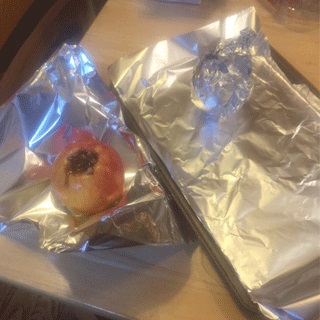 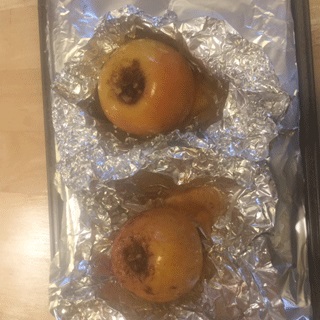 Spoon the mixture into the cored apple, pressing it in tightly. Wrap each apple individually in foil, and place on foil-lined cookie sheet.  (I find this makes clean-up much easier.) 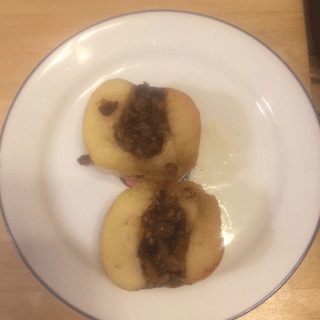 Bake for 40 to 45 minutes.  This time may vary due to differences in ovens, or in the size of your apples.

Remove from oven, cool for at least five minutes, then unwrap from foil and serve as is, or with whipped cream or ice cream.

Oatmeal Apple Crisp (Makes approximately eight servings)
Eight medium-sized apples of your choice. I used Gala.   (If using Granny Smith apples, you may wish to increase the amount of sugar.)

Preheat oven to 350 degrees. Peel and core apples. (This is the most time-consuming step.  However, I have a handy, little device that peels the apples lickety-spilt, then I core and slice them with an apple corer/slicer.

If you cook a lot with apples, or can applesauce, you may consider investing in a device that either peels and cores, or just peels apples.) Place the sliced apples in the greased casserole, and sprinkle the granulated sugar, flour, and 1 teaspoon cinnamon. 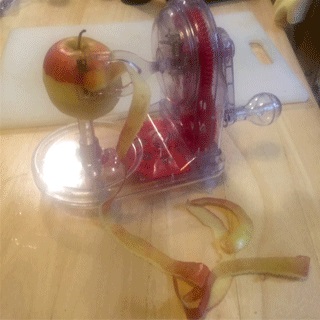 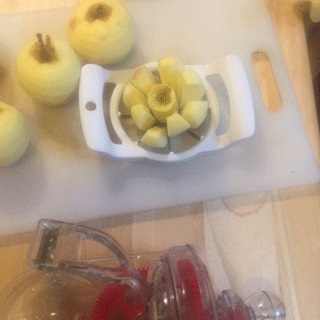 Toss to coat and mix, right in the casserole. Dot the top of the apples with a tablespoon of butter, cut into small pieces.
Melt butter in microwave using a medium-sized, microwave-safe mixing bowl. 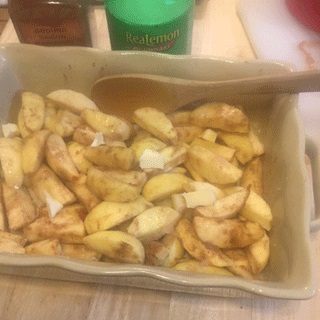 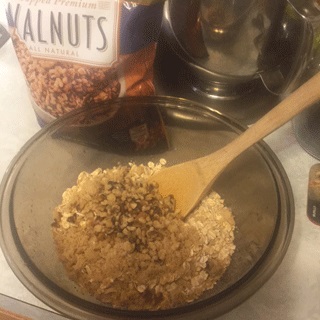 Add oats, brown sugar, 1 teaspoon cinnamon, and walnuts.  Mix well to combine.  Cover the apples in the casserole with the oat mixture.

Dot the top with tablespoon butter, cut into small pieces. (If desired, sprinkle a bit of cinnamon and granulated sugar on the top.)

Bake for 45 minutes to an hour.

If you feel the topping is becoming too brown before the apples are cooked all the way through, cover with foil for the rest of the baking time.

Serve as is, or topped with cream, whipped cream, or spoon on top of your favorite ice cream!

With both of these recipes, the walnuts can be substituted with chopped pecans. 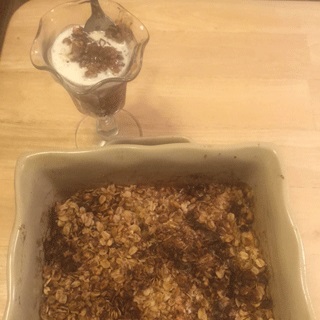 Although the nuts are optional, unless you or a family member just does not like nuts, or is allergic, they make the finished product even more delicious.

Use only fresh, ripe apples to get the best results.

Apples vary in their natural sweetness.  When using sugar in any apple recipe, adjust according to taste.  Some apples may require little or no sugar, others more than what is stated in the recipe.

Baking times and temperatures can often vary due to the variety, size, and freshness of your apples.  It is a good idea to check on your recipe while the apples are cooking to prevent over-browning of crusts or toppings.

A gadget such as an apple peeler/corer can be well worth the investment if you bake a lot with apples, or can or freeze applesauce.

Why Your Supermarket Sells Only 5 Kinds of Apples