This weekend I was lucky to attend a bee conference. The conference started off with a fantastic cuisine that was based on honey as a flavor or component of the meal.  We then got down to the brass tacks, “The Honey Bee Superorganism and Why It’s Important” lead by Dr. Keith Delaplane.

Keith serves as a Professor and Bee Program Director at the University of Georgia.  He writes a monthly article in the American Bee Journal called “For the Love of Bees and Beekeeping”.

This first evening discussion centered around “The Honey Bee Superorganism and Why It’s Important”.  Even though this was called a backyard beekeeping event, it did go into a high-level discussion of the evolution of the bee and the corresponding genetics involved in our everyday honey bee. 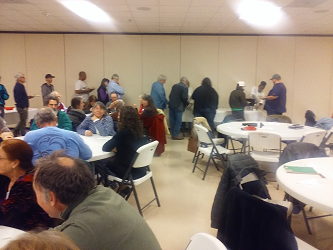 This was all fascinating information, but I can’t help but to think it may have caught a few off guard with the degree of in-depth genetics.  The bee colony is looked at as being an organism that is made up of many parts and individuals. The colony selects for itself, and the individuals will give their all for the good of the colony.

One of the highlights that I learned was that the queen of yesteryear was used to only mate with one drone.  As the queen bees evolved they were rewarded by evolution for polyandrous (multiple mating with different males) mating. With this occurring the diverse gene expression was expressed all the time and produced an advantage for survival and future reproduction.

The worker bees are considered “super sisters” since they contain 75% of the traits and the drones contain only 25% of the traits because they only have one chromosome (hemizygous).

We also heard about overwintering the colony. Keith promotes giving each hive 5 gallons of syrup in the fall.  He says one good way to do this is by using a quart zip lock and fill it up with syrup then put small slits in it so the bees can get to the syrup.  He says that works about as good, if not better, than any other feeder he has used.

Double queening was talked about. I had heard that the colony will only have one queen. I learned you can take a new queen and one third of the brood and place them in the top box, separate from the old queen and the two thirds of the colony, by double screening between the boxes.  This process is supposed to have high yields of honey. 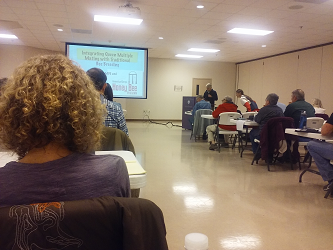 Another interesting subject was an experiment performed to see if distance between hives had any effect of varroa mites. Since most hives are placed side by side they tried separating them by a distance of 10 meters and 100 meters. The side by side and 10 meter spaced colonies had very little difference in varroa mite counts. However, the hives spaced 100 meters apart had significantly lower counts.

Propolis used to be considered something to try and scrape to get rid of. It has been determined that propolis is used by the bees as an immune response.  In fact, some beehives are being made with rough interiors to encourage the production of propolis.

The USDA back in the early 1900’s put out an article about bee thermos regulation in response to outside temperature. It was found that the thermoregulation is in response to the zone that the younger bees and the older bees feel comfortable in. The young ones like it hot and the older bees like it cooler. None of them relay the outside temperature into the bees on the inside of the cluster. 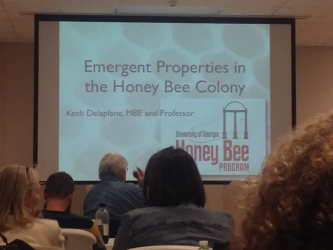 When the bees dance, they use the top of the hive as a reference to the sun. The waggle dance will go in a circle and will end up pointing towards the food source in relation to the sun.

Bees from early times built homes in cylinders. When they do not have comb they hang leg-to-leg. They eject platelets that are then stuck together to make a cylinder the size of a bee. The equal pressure on the sides of the cylinders produces a hexagon shape between them. 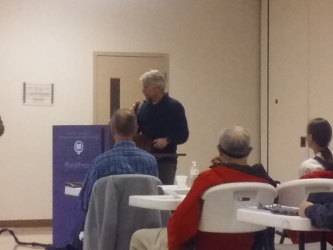 Old combs should be culled out after 3-5 years.  One should not leave them past 5 years. Reemphasize high drone densities for multi-mating. This gives the colony genetic diversity.

These are all thought provoking and great discussions about bees and their social behaviors.

What are my thoughts? I tend toward the natural beekeeping end of the spectrum. I do not have the experience nor the knowledge of almost all the bee keepers around me, but one thing I do know is that it is a losing battle when you fight against nature.

If we think we have domesticated the bees and that we must then feed them vast quantities of sugar so they survive, is that natural? Can they not fly and get their own food or leave for better food sources?

I know the nectar flow is during certain times of the year and that if enough stores are not acquired; the bees can starve. I do not want the bees to starve, but are we selecting for weak colonies by feeding the weak?  Shouldn’t we be selecting for the strong?

I have a lot to learn and I’m sure some of my ideas are naive. But I can’t help but to think that we are going down the same trail as the rest of agriculture has gone with high density feed lots for cow, hogs, chickens, etc.  Have we not seen enough problems come about from that?

I think that the natural way will produce stronger colonies and better quality honey.

This will help explain the Superorganism, the honey bee.