Without intentionally trying to get that involved with bees I now estimate to have over 10,000 pets now in one hive.  What’s nice is that I don’t have to feed and walk them like I do the dog, but I do have to bee very careful around them.

It all started last year when I wrote a couple of articles on mason and leafcutter bees.

It was harmless enough, reporting on an alternative to the honey bee for pollination, however, as I started to research more about plants, pollinators, and bee’s role in our food production, I decided to do more than just write about it.

I ordered and set up a house that hangs on my deck with tubes in it that are just the right size for the mason bee.  I thought, “why not?” all I have to do is set the cocoons in the house, and then they hatch out and pollinate the local flowers around the neighborhood.

The kit also comes with leafcutter bees that start their pollinating around the same time the mason bees are done for the season.  I thought, “This is easy, all I have to do is put them in a good spot and let nature take it from there!” 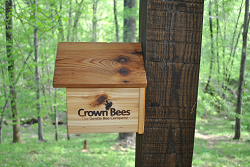 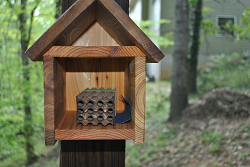 And this was true…until I decided to invest in honey bees next. Honey bees are different from leafcutter bees and mason bees, because they are more social and need to live in much bigger groups.  They are also more prone to stinging than leaf cutters and mason bees.  However, I decided to give it a try because I love honey so much!

I started to research bees and the type of hives that are used.  The main one used is Langstroth hive.  This is the most common and universal hive used by the general public and commercial apiaries.  The bees need to be watched and tended to quite a bit since they can become stressed, which is a leading factor in health problems for the bees.

Since I have never kept bees before, I knew this would take some more research and some helpful advice.  I thought, “what better place than the local bee association?”  I went on line and found the Rappahannock Beekeepers Association, my local bee association and they had a wealth of information.  I started to read about all the different types of hives and bees and came across a link called Beekeeping Naturally by Michael Bush.

Michael described various ways of keeping bees along with the pros and cons of each method.  The method that drew my attention was the “top bar hive.”

The top bar hive has bars across the top of the hive box, which are used for the bees to build their cone from.  This can be used instead of a starter cone or other mechanism that would require the bees to build a cone to a larger size than normal, which is commonly done.

The thought is to let the bees build a cone the way they would naturally. This would allow the bees to hatch out earlier than with a larger cone and thus have less trouble with the Varroa Mites, which are one of the (unfortunately not the only) most troublesome pests for bees.

I started to look for a place that sells top bar hives and I came across bethinking.com which is located in Oregon.  They explained how the Warre Hive worked, which is a top bar hive that is conducive to natural bee keeping.  Besides that, it is made from red cedar which is a long lasting and beautiful wood.

I ordered a starter kit which included a jacket with bee veil, gloves, smoker, Tung oil, and the Warre Hive unassembled.  The instructions said it would take about an hour to assemble.  It took me two days.  It is not that complicated, I just spent too much time trying to make it perfect and still did not get everything square.  The lesson learned is to use wood vices, maybe even glue the pieces together then insert the screws. 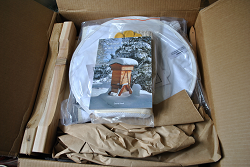 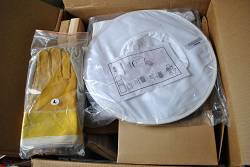 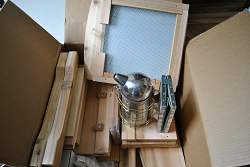 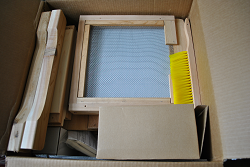 This is what comes in the box.

Even with my lack of skill with wood, I was able to put it together and what an impressive hive it is, if I do say so myself!  It even came with a window so the bees have a good view.  Well not really.  It comes with a glass insert (observation port) so you can slide a grooved board to the side and view the bees at work without opening up the hive. 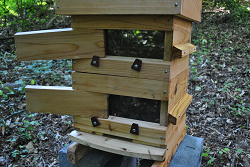 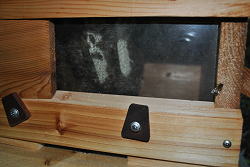 I had been looking over the yard for the perfect place to put the hive, since in Fredericksburg, VA you are required to have a permit to keep bees.  A police officer comes out from animal control to be sure you are at least 10 feet from a border fence or lot line and five feet from rear fence or lot line.  The hive is supposed to be concealed by a fence or shrubbery so the curious are kept out and the bees have to fly up and hopefully away from neighbors.

Another thing to remember is that you have to have a water supply for the bees so they are not tempted to go to your neighbor’s dog dish or swimming pool to get a drink.  Bees need quite a bit of water since they use it to cool the hive and produce honey.  This is also a requirement that has to be met to get a permit.

Plus, you had to have the inspection with no bees in the hive so the inspector would not get stung.  The only problem with that was I already had the bees and needed to put them in the hive as soon as possible.

I had contacted the local president of the bee association and he had a spare package of bees that he would sell me, but I had to get them in their new home so they wouldn’t die.  That’s how I know I have over 10,000 bees since a package generally has 10,000 to 12,000 bees plus a queen.

Needless to say, I had neither the right spot picked out nor the water ready when the officer arrived.  I thought a hose hooked up to the faucet would be good enough. Nope, I had to have the water already available for them.

I was almost a little desperate when it came time for the inspection, but the officer was very nice and just wanted me to follow the rules. I moved the hive and dug out a place to fill with water and my bees were more than ready to move into their hive with a view.  The paperwork was signed for the permit, fees paid and now I am a proud owner of a live bee hive.

———————
An update on all my bees.  End of season for mason bees.  The home I put out for them has been used, but still have rooms for rent.  It is now the leafcutters turn for pollination.  I received the leafcutter cocoons a few weeks ago from Oregon and some of the cocoons have hatched out.  I have been informed that it is time to bring the mason bee tubes inside for safe keeping.  The leafcutters will stay and pollinate the rest of the summer.
I have all the bees and the queen in the hive, fed them for a couple of days and now they are on their own.  I will look in on them to be sure all is well, but try not to bother them too much.

Until next time I will bee thinking of you, oops did it again. 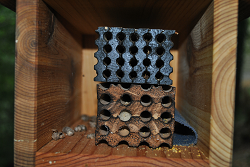 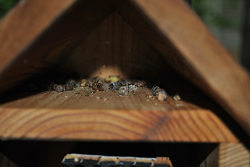 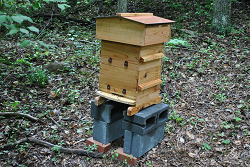 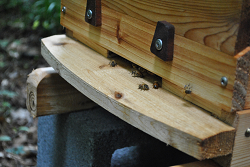 Check with your local government to see if a permit is required and what the regulations are for bee keeping.

Be sure to have plenty of water available for the bees.

Pick up some wood pellets.  I tried using pine needles and dead leaves, but had problems with trying to light them after all the rain we have had.