Today’s essay shares how you can overcome gardening obstacles by just being a little creative.  It is not how much area you have to garden with, but how you use what you do have.

Many years ago, as a newlywed, I desired to try my hand at vegetable gardening.

My husband built four raised beds in a small, sunny area at the back of our shady city lot, and we enjoyed several summers of flavorful tomatoes, and crunchy cucumbers along with yellow squash and green beans.

When our first two children, born a year apart arrived, I managed to maintain the garden with grand plans to have our children grow up with a constant supply of seasonable, fresh vegetables.

However, the birth of another baby, coupled with the fact that our back-yard neighbors planted quick-growing bushes along the fence line adjacent to the back of the garden, shading the area, soon put an end to gardening activities.

One of the beds became a sandbox, and the others were removed to add additional space for a play area.

Years passed, and summers were crunched with activities.  I missed the garden, but as the back yard became shadier and our schedules busier, gardening became a distant memory.

One summer, about six years ago, I thought I could least try to grow tomatoes, but there was simply not enough sunlight in the yard to sustain the plants.

The only place where there was a good deal of available sunlight was our small deck on the back of the house.

That was it!  I could put tomato plants in containers on the deck.  I filled some pots with soil collected from the yard, added the plants and water and waited with eager anticipation for my crop.

Even though I religiously watered the small crop, one by one the plants withered and died, not even rewarding my efforts with one small tomato.  Frustrated, I declared my gardening days were over.

A few years later, I became interested in cooking with fresh herbs.  I bought some basil, oregano, and mint plants.

This time I invested in a good quality potting soil, put the plants into twelve-inch pots, and placed them on the deck.

To my surprise, they flourished, rewarding me with flavorful, fresh seasonings for the season. Exploring, I found a section of the yard which received a respectable amount of sun, and planted more containers of varying sizes with a variety of herbs. 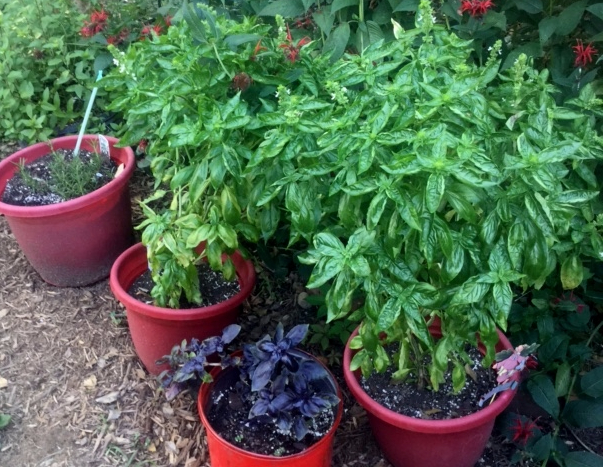 Fast-forward to three years ago.  My backyard neighbor decided to cut down the large holly bushes bordering and shading the back of our yard.

Even though it was late winter, sunlight poured into a small section of the yard.  I quickly decided it was now or never.  The ground was prepared for planting; I mixed in some organic compost, and began planning a vegetable garden.

Around part of the perimeter I decided to experiment with putting some extra tomato and pepper seedlings in mid to large-sized pots to hopefully add to the harvest.

By now, I had learned that a huge factor for success growing anything in a pot is the quality of soil placed in it.  (Digging up heavy, clay-filled dirt from the yard as I had done in the past, will not produce a happy plant!) 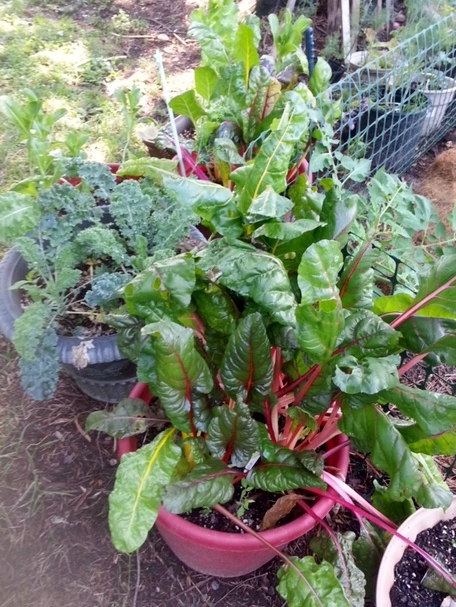 This year is the third year for the garden. It has been expanded twice, and the removal of a tree (in addition to the bushes) in my neighbor’s backyard provided much more late morning and afternoon sunshine, and opened up another small area for extra gardening space.

Last year’s yield of fresh tomatoes, peppers, eggplant, lettuce, kale, collards, onions and garlic was quite successful, and a substantial part of it was provided by plants grown in containers. 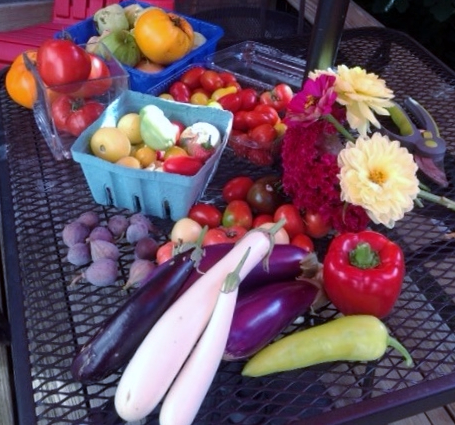 Perhaps you have thought that you would like to be able to have a garden, but do not have the space or time to maintain it.

If this is the case, consider starting a small container garden in a sunny area such as a balcony, deck, or a portion of your yard. 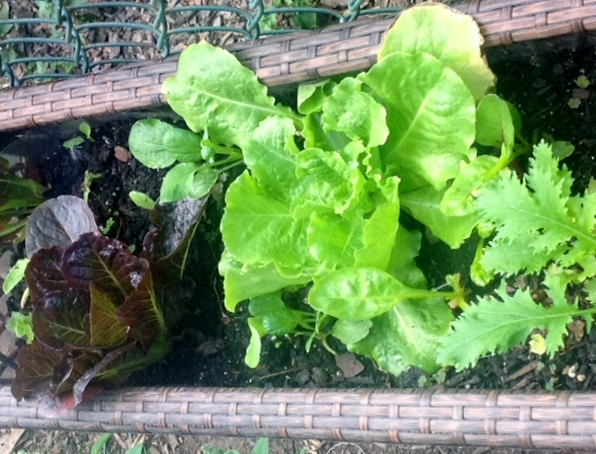 Even though it may be a bit late this year for tomatoes or peppers, many garden centers still have herbs available, and in about four to six weeks, lettuce, kale, chard, and collard green seedlings will arrive.

These cool-weather plants grow quite well in containers, and will provide fresh greens until the first hard frost.

To get started, use twelve to sixteen inch containers for herbs; larger ones for kale, collards or lettuce seedlings. Use a good quality soil mix, which is loose and aerated.

Some contain fertilizer in them.  (I tend to shy away from those mixes for vegetables, but if this is your first venture into gardening, it probably does not make a huge difference.  Just remember that eventually, especially if you reuse the soil next year, you will have to mix in organic compost or fertilizer to keep the soil viable.)

Choose a sunny area for the herbs and water well after planting.  In about a week, after the plant becomes established, you will not need to water daily.

Most herbs prefer to have the soil a little dry, and some claim their taste is stronger if the soil is not always kept moist.

If you plant rosemary, oregano, mint or chives, your plants will die back in the winter, but unless conditions are unusually harsh, they will return the following spring.

Some herbs, such as basil, are annuals, and will need to be replaced next year unless brought indoors.

Lettuce, chard, kale and collards can grow in partial shade, but will grow larger leaves with around six hours of sunlight. They prefer cooler temperatures and small plants are usually available for purchase in mid to late August.

Once they become established, the evenings should be getting cooler and daytime temperatures decreasing.  As they grow in size, you can begin to harvest them by cutting off the outer leaves.

By October, you should be rewarded with some tasty, nutritious greens, which you can season with your fresh herbs! Also, Keep in mind that these same cool-weather greens will be available to plant again in the spring and will last until around the end of June.

The exception is chard…if you plant it in the spring, it will grow all summer and into autumn.

There is nothing quite like walking outside and harvesting something fresh and delicious from your own little garden.

And, if you are able to expand your garden, the exercise, fresh air and sunshine have added health benefits for fitness and even mental well-being.

To read the Tips & Recipes, click on this short link to the Urban Farm Lifestyle Magazine and please subscribe to the Free Issues.