What is diatomaceous earth or DE?

“Diatomaceous earth is a soft, powdery, porous, and silica-rich mineral that is found in fossilized deposits near dried up bodies of water.  This mineral is the result of the accumulation of dead diatoms found in marine sediments, which contain the remains of silica.”

I have found that quite a few people take the 100% food grade internally and according to Dr. Axe has these benefits:

The use that I thought was interesting was for ants and fleas.  These are two very hardy insects and hard to get rid of once they make your way into your home.

Diatomaceous earth is a really inexpensive way to control external and internal parasites in your dog and cat.

The microscopically sharp edges contact the insect or parasite, and pierce their protective coating, so they soon dehydrate and die.  The larvae is affected in the same way. But DE is completely harmless to animals.

The only thing that you should be very careful about is not inhaling a lot into your lungs.  It is easy to do, so if need be, wear a mask if you think you might inhale a lot while working with your pet.

DE can be placed on your pet, cat or dog and the powder rubbed through the fur to the skin. When the fleas come in contact with the DE, it will help the eliminate them.  I don’t have a flea problem in the house, but I have had to deal with it in the past. I with I had know about DE.

One problem I am anxious to try this out on is ants.  I have had an ant problem in the house for about a year now.  They haven’t taken over, just around enough to be a real annoyance.

Another use I would really like to try this out out on, is with the chickens.  It appears that DE can really help chickens with egg production.

The Food and Drug Administration lists Food Grade diatomaceous earth as “Generally Recognized as Safe”, which means it’s legally allowed to be added to many different types of foods, beverages and supplements.

In summary, it is my belief that Diatomaceious Earth can be a very useful product for eliminating pest naturally.  I do not know enough about the product that I would necessarily take it internally, but I would not be opposed to trying it. 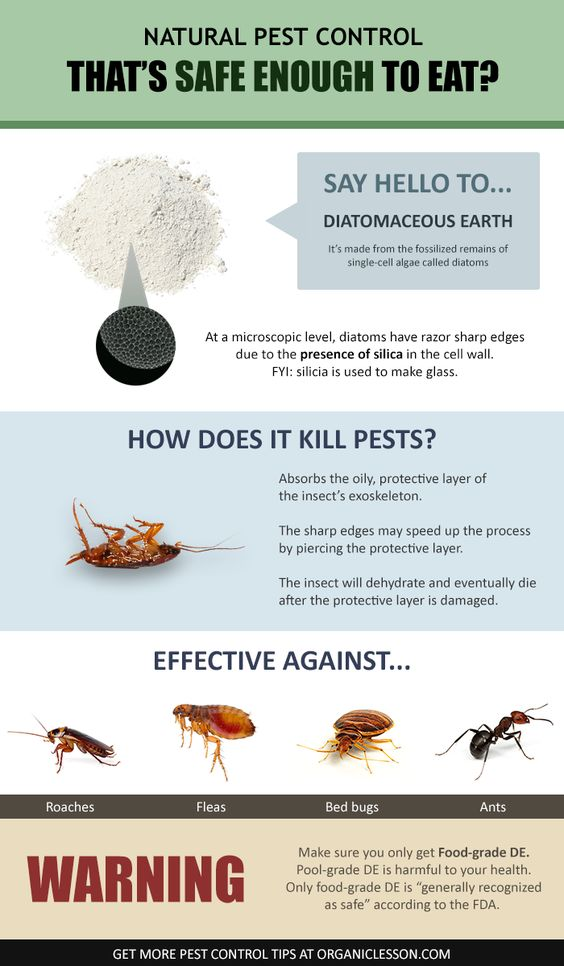 -DO NOT USE POOL GRADE DE-