Ever go mushroom hunting outdoors?  Finding mushrooms and eating them fresh is an experience for the taste buds.
“Don’t eat a mushroom unless you’re certain it’s an edible species!”

I can remember when I was really young, my grandpa and I would go out in the woods to look for mushrooms.  We didn’t always find them but it was a lot of fun just being in the woods.

As I grew older, some of the guys I worked with went looking for mushrooms, I don’t know how they did it but they always came back with a hat or small basket full.

They would then fry them up.  You might ask how did they fry them at work, well I use to work in some pretty rural areas and having the means to cook at an office was not out of the ordinary.

That was also the first time I ate coon.  But back to the topic of mushrooms.  The guys I had worked with had hunted mushrooms since they were little kids, same as my grandpa and they knew what they were looking for and where to look.

In today’s world, that type of knowledge is not as common as it used to be.  In fact, I would caution anyone looking on the internet to determine if the mushroom they brought in from the field is edible, to be sure and go to a very reputable site.

The result of being wrong or getting wrong information can be a mild sickness and in some cases depending on the mushroom, you can die from eating it.

Now that the cautions have been discussed, I would like to point out some ways to grow mushrooms at home.

One of the easiest ways to grow mushrooms is straight out of a box.  Two young entrepreneurs started a company called Back to the Roots.  They have a growing kit that is complete and in a box. 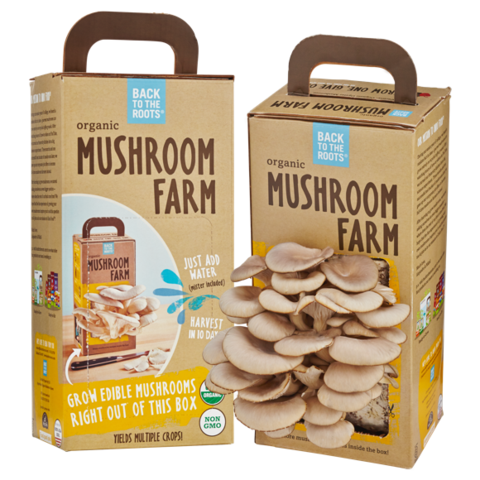 “In a college class, we learned that mushrooms could grow on recycled coffee grounds. After watching hours of how-to videos and turning our fraternity kitchen into a big science experiment, we eventually decided to give up our corporate job offers to instead become full-time mushroom farmers. What started as curiosity about urban farming has turned into a passion for “undoing food” and reconnecting families to it through fun, delicious and sustainable “ready to grow” and “ready to eat” products.

What type of mushroom does the Mushroom Mini Farm grow?

Our mushroom mini farm grows gourmet Pearl Oyster mushrooms. They’re commonly found in Europe and Asia and are used increasingly in a variety of cuisines for their velvety texture, smooth taste, and dense nutrient content.

What is the Mushroom Mini Farm growing on? Is it eco-friendly?

The Mushroom Mini Farm is made from all organic recycled waste including corn cob and sawdust.

What is the white layer covering the mini farm?

The white layer is mycelium! It’s similar to the “roots” of the mushrooms (if mushrooms had roots).

Oyster mushrooms have a mild flavor that is very versatile when it comes to the food they complement. They have a delicate, velvety texture that pairs well in pasta, skewers, soups, salads, and anything else you like to put mushrooms in! They taste amazing, especially when they’re so fresh, and can be eaten raw or cooked. Chef Alice Waters of acclaimed Berkeley restaurant Chez Panisse has raved about their authentic, nutty, flavor. See what she has to say!

What are the health benefits of eating oyster mushrooms?

Oyster mushrooms are extremely healthy and rich, given that one-third of their dry weight is protein. They contain amino acids and enzymes that have been shown to boost the immune system and are rich in vitamin C, vitamin B complex, and most of the mineral salts required by the human body. Calcium, phosphorous and iron content in oyster mushrooms are double the amount found in most meats. They are also known to lower cholesterol, boost the immune system, and may even inhibit tumor growth.”

If their story doesn’t sound like enough of a reason to start growing mushrooms, then you need to listen to Paul Stamets “6 Ways Mushrooms Can Save The World”  Ted Talk.

Mushrooms taste good, are good for you and they may even help save us from some of the disasters looming out there in the world that could alter our life.  Well, that sounds a little strong, anyone for a fried mushroom?

This is a really good Ted Talk, Even If You Don’t Read The Article –  Please Watch!

Wild mushrooms: What to eat, what to avoid
“Don’t guess,” advises Tradd Cotter, who has been cultivating mushrooms for more than 20 years