Up until a few years ago I had not heard of gluten intolerance, but now my church even has gluten free communion.  So, what is gluten and how does it affect our body?

Gluten (from Latin gluten, “glue”) is a mixture of proteins found in wheat and related grains, including barley, rye, oat, and all their species and hybrids (such as spelt, kamut, and triticale).

It sounds like gluten should be good for us except that part about the glue. When you take flour and mix in water you will form an elastic material that can be shaped, stretched and formed.

This material is known as dough and is used to make bread and cakes. Sometimes even extra gluten is added to form different textures in cakes. 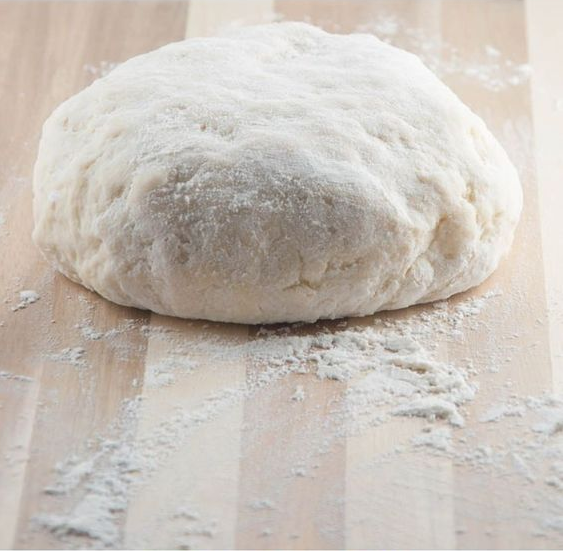 “But those same “binding” properties also interfere with the breakdown and absorption of nutrients, including the nutrients from other foods in the same meal. The result can be likened to a glued-together constipating lump in your gut, which can impede proper digestion.

The undigested gluten then triggers your immune system to attack the lining of your small intestine, which can cause symptoms like diarrhea or constipation, nausea and abdominal pain.

Over time, your small intestine becomes increasingly damaged and inflamed. This in turn can lead to malabsorption of nutrients and nutrient deficiencies, anemia, osteoporosis and other health problems.

The condition can also cause a wide array of other symptoms that are not gastrointestinal in nature, including neurological or psychological problems, and problems related to the skin, liver, joints, nervous system and more.

Celiac disease is also connected to autoimmunity. If you’re diagnosed with celiac’s after the age of 20, your chances of developing an autoimmune condition skyrocket from the average 3.5 percent to 34 percent.

Gluten can be found in a lot of food products such as beer, pasta, all sorts of breads like pretzels, bagels, pizza, and the list goes on.

So I have to ask, why can some people tolerate gluten while others can not? Is this another one of the new age allergies? I never even heard of gluten intolerance until the last few years.

There are several factors that have contributed to the rise in this intolerance and a lot has to do with the hybridization of wheat that has resulted in higher levels of the gluten protein. Another change  is the wide use of   glyphosate (Roundup herbicide) being heavily used in wheat production to stimulate more seeds and higher yields. 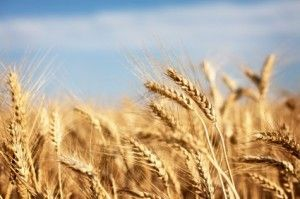 Roundup is used as a “Preharvest” on wheat.  The application is absorbed into the wheat and and kills the wheat since it is not GMO, thus producing a more even harvest.  This is not allowed on wheat used for products like beer. 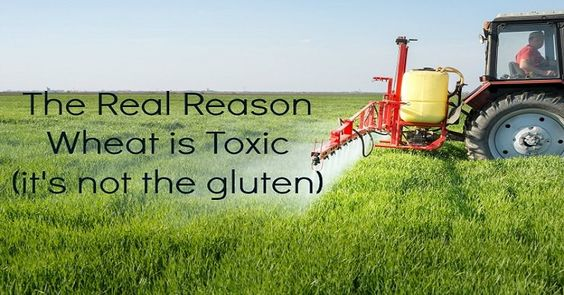 Higher yields sounds like a good thing, and it can be, but in the last 15 years or more the use has greatly increased along with the rise in Celiac Disease. Glyphosate can damage your gut flora and can cause severe problems.  Glyphosate has been found in the foods that we eat like pizza and bagels.

“Not only does the glyphosate seriously impair the villi in your gut, it also inhibits a process that normally helps your body digest wheat proteins. 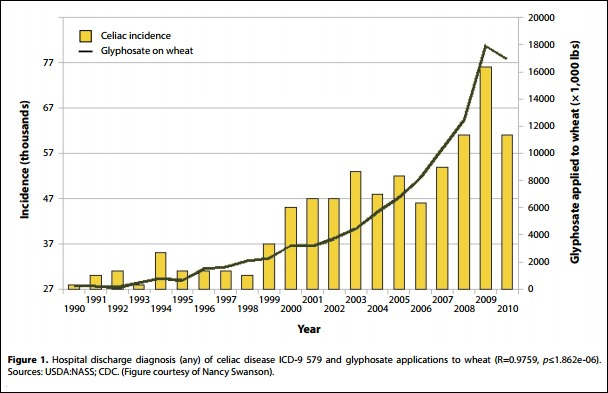 The gliadin in gluten is difficult to break down and digest. Normally a reaction takes place that builds connections between different proteins in the wheat.

Glyphosate appears to attach to the gliadin as a consequence of a chemical reaction, and by interfering with the protein connections, glyphosate makes the wheat highly indigestible — more so than it already is — and more likely to cause an immune reaction and gut dysbiosis.” http://articles.mercola.com/sites/articles/archive/2016/07/02/gluten-food-processing.aspx writes,  Dr. Mercola

Another culprit contributing to the gluten intolerance epidemic is how wheat is milled and bread is made.

“The endosperm and the starch are roller milled, but all the other ingredients are first extracted and then added back in at varying proportions, depending on the requirements of the end product. What you end up with is highly refined wheat flour that is more likely to cause GI problems.

Whole grain flour is made by grinding the whole grain using a stone mill. Nothing is taken out and nothing is added in. The end product contains the entire grain, hence the term “whole grain.” The process is much simpler and less destructive to the nutritional content of the grain.

While whole grain bread still contains gluten, it might not cause as severe a problem if you don’t have celiac disease. Some believe the problems attributed to gluten may in fact be related more so to the chemicals used during the processing of refined wheat flour, than to gluten itself.”
http://articles.mercola.com/sites/articles/archive/2016/07/02/gluten-food-processing.aspx according to Dr. Mercola

The other thing that has changed is how long the dough is let to rise. The dough used to rise overnight, allowing the yeast enzymes to break down the gluten.

In today’s methods the dough often only rises for a couple of hours. Thus containing more indigestible gluten than in breads made in the past. The best practice to not have the symptoms from ingesting gluten is to abstain from whole grains.

But I thought everyone was supposed to eat whole grains as part of a good diet? 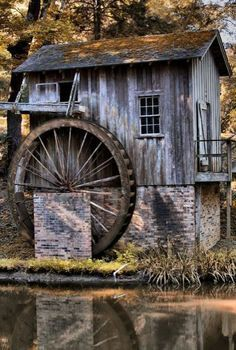 According to “The U.S. Dietary Guidelines Advisory Committee, a group of scientists convened to offer nutrition recommendations for Americans to the federal government, has said, “dietary patterns of the American public are suboptimal and are causally related to poor individual and population health and higher chronic disease rates.

” The scientists recommended diets higher in fruits, vegetables, and whole grains than is currently consumed. “Across all ages and both sexes,” they added, “the U.S. population does not meet the goal for whole grain intake, The inadequate intake of whole grains leads to underconsumption of several … nutrients of public health concern.” http://www.livescience.com/51826-gluten-free-diets-can-be-unhealthy.html
Katherine Tallmadge

It appears that unless you are on the paleo diet, you should be eating more whole grains.  As usual, industry has jumped on the bandwagon of “gluten free” which even French fries can be classified as gluten free.

So what to make of this, if you have celiac disease, you do not have much choice but to abstain from gluten.  To follow the US Dietary Guidelines will be hard for the rest of us, if you eat processed foods and have symptoms of gluten intolerance. One solution for some may be to eat organic foods and try to stay away from processed foods as much as possible.

It appears again that one of the health problems that many in this country are suffering from points back to the food industry.

This will only continue to get worse until we use our food dollars to vote for a change. A change in how our food is grown and processed. The food industry will take note. 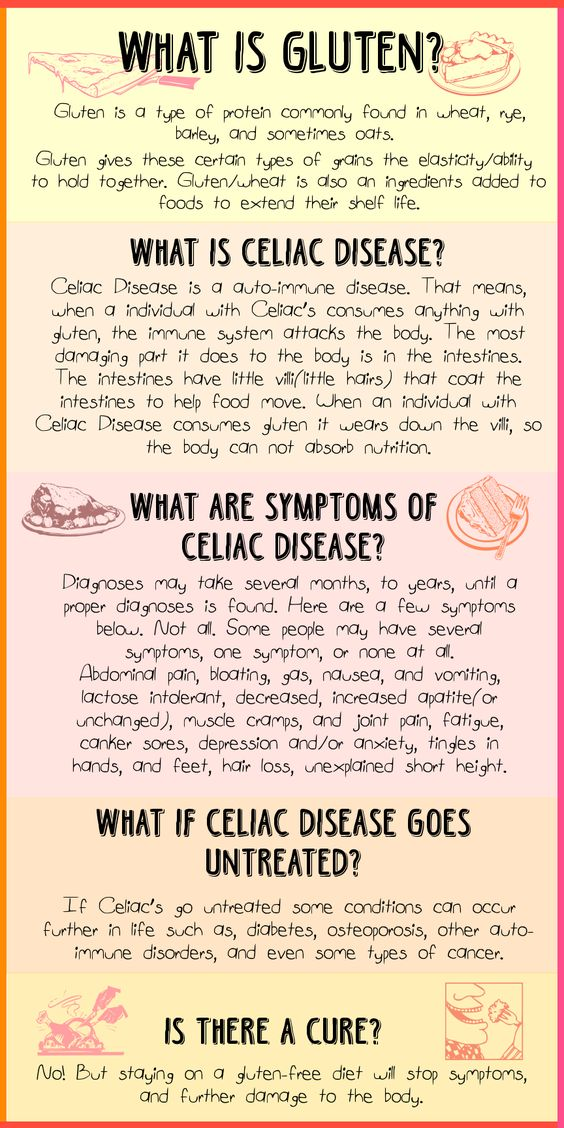