Memorial Day, first known as Decoration Day, started back in 1868 to honor the fallen confederate and union soldiers. In 196, federal law declared Memorial Day the official name. This is a holiday to remember all our soldiers that paid the greatest price for our country and freedom. 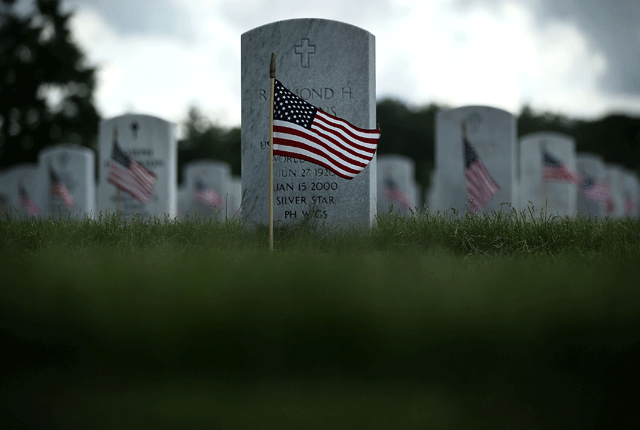 10 Things to Remember About Memorial Day
by David Holzel

1. “IT STARTED WITH THE CIVIL WARMemorial Day was a response to the unprecedented carnage of the Civil War, in which some 620,000 soldiers on both sides died. The loss of life and its effect on communities throughout the country led to spontaneous commemorations of the dead:

• In 1864, women from Boalsburg, Pa., put flowers on the graves of their dead from the just-fought Battle of Gettysburg. The next year, a group of women decorated the graves of soldiers buried in a Vicksburg, Miss., cemetery.

• In April 1866, women from Columbus, Miss., laid flowers on the graves of both Union and Confederate soldiers. In the same month, in Carbondale, Ill., 219 Civil War veterans marched through town in memory of the fallen to Woodlawn Cemetery, where Union hero Maj. Gen. John A. Logan delivered the principal address. The ceremony gave Carbondale its claim to the first organized, community-wide Memorial Day observance.

• Waterloo, N.Y. began holding an annual community service on May 5, 1866. Although many towns claimed the title, it was Waterloo that won congressional recognition as the “birthplace of Memorial Day.”

2. GENERAL LOGAN MADE IT OFFICIAL

Gen. Logan, the speaker at the Carbondale gathering, also was commander of the Grand Army of the Republic, an organization of Union veterans. On May 5, 1868, he issued General Orders No. 11, which set aside May 30, 1868 “for the purpose of strewing with flowers, or otherwise decorating the graves of comrades who died in defense of their country during the late rebellion.”

The orders expressed hope that the observance would be “kept up from year to year while a survivor of the war remains to honor the memory of his departed comrades.”

3. IT WAS FIRST KNOWN AS DECORATION DAY

The holiday was long known as Decoration Day for the practice of decorating graves with flowers, wreaths, and flags. The name Memorial Day goes back to 1882, but the older name didn’t disappear until after World War II. Federal law declared “Memorial Day” the official name in 1967.

4. THE HOLIDAY IS A FRANCHISE

Calling Memorial Day a “national holiday” is a bit of a misnomer. While there are 10 federal holidays created by Congress—including Memorial Day—they apply only to Federal employees and the District of Columbia. Federal Memorial Day, established in 1888, allowed Civil War veterans, many of whom were drawing a government paycheck, to honor their fallen comrades without being docked a day’s pay.

For the rest of us, our holidays were enacted state by state. New York was the first state to designate Memorial Day a legal holiday, in 1873. Most Northern states had followed suit by the 1890s. The states of the former Confederacy were unenthusiastic about a holiday memorializing those who, in Gen. Logan’s words, “united to suppress the late rebellion.” The South didn’t adopt the May 30 Memorial Day until after World War I, by which time its purpose had been broadened to include those who died in all the country’s wars.

In 1971, the Monday Holiday Law shifted Memorial Day from May 30 to the last Monday of the month.

Some 5,000 people attended on a spring day which, The New York Times reported, was “somewhat too warm for comfort.” The principal speaker was James A. Garfield, a Civil War general, Republican congressman from Ohio and future president.

“I am oppressed with a sense of the impropriety of uttering words on this occasion,” Garfield began, and then continued to utter them. “If silence is ever golden, it must be beside the graves of fifteen-thousand men, whose lives were more significant than speech, and whose death was a poem the music of which can never be sung.” It went on like that for pages and pages.

As the songs, speeches and sermons ended, the participants helped to decorate the graves of the Union and Confederate soldiers buried in the cemetery.

6. NOT EVEN THE UNKNOWN SOLDIER CAN AVOID MEDIA SCRUTINY THESE DAYS
“Here rests in honored glory an American soldier known but to God.” That is the inscription on the Tomb of the Unknowns, established at Arlington National Cemetery to inter the remains of the first Unknown Soldier, a World War I fighter, on Nov. 11, 1921. Unknown soldiers from World War II and the Korean War subsequently were interred in the tomb on Memorial Day 1958. 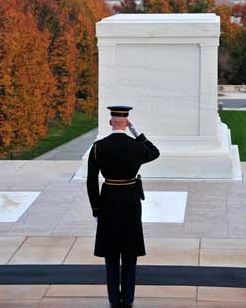 An emotional President Ronald Reagan presided over the interment of six bones, the remains of an unidentified Vietnam War soldier, on Nov. 28, 1984. Fourteen years later, those remains were disinterred, no longer unknown. Spurred by an investigation by CBS News, the defense department removed the remains from the Tomb of the Unknowns for DNA testing.

The once-unknown fighter was Air Force pilot Lt. Michael Joseph Blassie, whose jet crashed in South Vietnam in 1972. “The CBS investigation suggested that the military review board that had changed the designation on Lt. Blassie’s remains to ‘unknown’ did so under pressure from veterans’ groups to honor a casualty from the Vietnam War,” The New York Times reported in 1998.

Lt. Blassie was reburied near his hometown of St. Louis. His crypt at Arlington remains permanently empty. [Image courtesy of VisitingDC.com.]

On Memorial Day weekend in 1988, 2,500 motorcyclists rode into Washington, D.C. for the first Rolling Thunder rally to draw attention to Vietnam War soldiers still missing in action or prisoners of war. By 2002, the ride had swelled to 300,000 bikers, many of them veterans. There may have been a half-million participants in 2005, in what organizers bluntly call “a demonstration—not a parade.”

A national veterans rights group, Rolling Thunder takes its name from the B-52 carpet-bombing runs during the war in Vietnam.

8. MEMORIAL DAY HAS ITS CUSTOMS

General Orders No. 11 stated that “in this observance no form of ceremony is prescribed,” but over time several customs and symbols became associated with the holiday.

• It is customary on Memorial Day to fly the flag at half staff until noon, and then raise it to the top of the staff until sunset.

• Taps, the 24-note bugle call, is played at all military funerals and memorial services. It originated in 1862 when Union Gen. Dan Butterfield “grew tired of the ‘lights out’ call sounded at the end of each day,” according to The Washington Post. Together with the brigade bugler, Butterfield made some changes to the tune.

Not long after, the melody was used at a burial for the first time when a battery commander ordered it played in lieu of the customary three rifle volleys over the grave. The battery was so close to enemy lines, and the commander was worried the shots would spark renewed fighting.

• The World War I poem “In Flanders Fields,” by John McCrea, inspired the Memorial Day custom of wearing red artificial poppies. In 1915, a Georgia teacher and volunteer war worker named Moina Michael began a campaign to make the poppy a symbol of tribute to veterans and for “keeping the faith with all who died.” The sale of poppies has supported the work of the Veterans of Foreign Wars.

9. THERE IS STILL A GRAY MEMORIAL DAY

10. EACH MEMORIAL DAY IS A LITTLE DIFFERENT

No question that Memorial Day is a solemn event. Still, don’t feel too guilty about doing something frivolous (like having barbecue) over the weekend. After all, you weren’t the one who instituted the Indianapolis 500 on May 30, 1911. That credit goes to Indianapolis businessman Carl Fisher. The winning driver that day was Ray Harroun, who averaged 74.6 mph and completed the race in 6 hours and 42 minutes.

Gravitas returned on May 30, 1922, when the Lincoln Memorial was dedicated. Supreme Court Chief Justice (and former president) William Howard Taft dedicated the monument before a crowd of 50,000 people, segregated by race, and which included a row of Union and Confederate veterans. Also attending was Lincoln’s surviving son, Robert Todd Lincoln.

In 2000, Congress established a National Moment of Remembrance, which asks Americans to pause for one minute at 3pm in an act of national unity. The time was chosen because 3pm is the time when most Americans are enjoying their freedoms on the national holiday.”

Memorial Day is a time to remember, a time to be with and enjoy family, a time to reflect on the sacrifice of so many that died so we could live with the freedoms that we enjoy today.

Memorial Day is the start of summer vacation time for many.  A time to fire up the grills and burn some meat.  Enjoy the weekend but take time to remember, take time to say thank you, take time to reflect on all the everyday rights and freedoms that so many in the rest of the world do not have.

Let us know your thoughts on today’s issue.
Posted in Magazine Issues Tagged with: Memorial Day