Fall temperatures are dropping and plants are finding a new home inside.  Help your plants thrive with the proper potting soil. In this article, are some tips to keep your plants healthy throughout the winter.

I want to share with you this article by  Jon VanZile in houseplants.about.com, Jon explains how peat-based soils may not be the best thing to use when you are preparing your soils for the plants that you would like to pot.

”Most soil mixes are peat-based mixes, often made with reed or sedge peat, and pH adjusted with lime. They are rich and loamy fresh out of the bag, and often they are enhanced with fertilizer or water-retention crystals.

If you’ve been gardening for a long time, though, I’m sure you’ve noticed that plants rarely thrive in these kinds of soils for too long. Instead, after a growing season—or maybe even two—the plant no longer grows as fast or looks as vibrant.

With some poorer quality bagged soils, plants are lucky to survive a few months.
This happens because peat-based soils really aren’t designed for long-term use. They’re not actually designed for plants at all—they’re made for us. They’re cheaper to produce, and they are lightweight and easy to bag and sell.

The problem is that peat decomposes quickly. Like any organic material, all soils decompose over time, but peat is an especially rapid decomposer.

It’s safe to say that most peat-based soils are mushy soup within a year, and some come right of the bag as a heavy glop of mush.

As these soils decompose, a number of negative forces will affect your plants:

The peat slowly compresses. In the pot, it’ll look like the dirt is “settling,” when in fact, it’s actually breaking down.

As it does, the particles pack themselves around the roots, slowly starving them of oxygen. The youngest, newest and smallest roots are affected first. Just like plants need water and fertilizer, they also need ample air around the roots.

A plant with good aeration in the root zone is a healthy plant. A plant that can’t breath is … well, a dead plant.Drainage is impeded. As the soil particles become smaller and smaller, it’s harder for water to drain through the pot.

And believe it or not, a layer of drainage pebbles at the bottom of the pot will actually make this problem worse. All you’re doing is reducing the amount of soil in the pot, so the plant will have even less room to grow.

Salt build-up is encouraged. As the drainage slows, it allows for a faster buildup of salts and solids from fertilizer.

Over time, this stresses the plant and can scorch the same tender roots that are stressed by the soil impaction.

With all of this happening in a single season, is it any wonder that plants that thrive for a few months in their new pots begin to loose vibrancy within a year?

But what can we do?”

Find out under Tips.

Laurie Calloway has found another benefit from coconuts, which comes from the byproduct of leftover coconut shells.

Not only does the humble coconut provide delicious sweet meat, milk, and oil, it also can provide a wonderful benefit for your garden as well…container gardens in particular.

Even though the vegetables in containers produced quite well in my garden this year, (in fact, some are still producing peppers and eggplant) I am already looking forward to supplementing the soil next year with coconut peat.

I was unaware of coconut peat until this past spring, when my sister-in-law told me about it.  She had purchased it, and used it to enhance the soil she was using for her container plants.  Also known as coconut coir, it is made from the husks of coconuts, which have long been considered a waste material from manufacturing coconut products.

What is amazing about the coco peat, as is often called, is that it has the ability to retain large quantities of water. 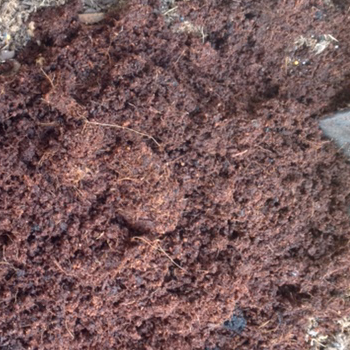 Coco Peat
By tossing it in with good quality soil, the soil becomes enabled to hold in more moisture for the plant, reducing the need for frequent watering.  When mixed into a raised bed, or garden soil, it can be compared to a good quality peat moss, which many use to enrich their garden soil.

In fact, it has the added benefit of having a neutral pH level, (Peat moss has a higher acidic level) thereby lessening the need to further supplement the soil with lime to help balance the acidity.

Just be aware that even though it has many benefits, coco peat really does not have a lot of nutrients, so you still need to add organic humus or compost to your soil.

However, when used often over time, it will eventually add some organic matter to your garden or the soil in your container as it breaks down.

There are many different brands on the market.  (Many can be purchased on amazon.com and delivered right to your door.) It usually comes in a compressed brick or disc shape.

Upon adding water and mixing, the “brick” will expand, and you will soon have a large mound of coco

peat.  A large lawn-sized plastic trash can prove helpful to use to mix and store it.

While dreaming and planning for next year’s garden, consider giving this coconut by-product a try. (I look forward to perhaps watering the containers less often, and maybe having a bit more time to sip on a frozen pina colada!) 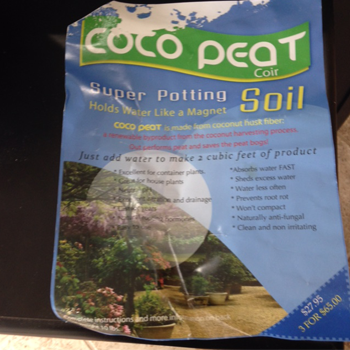 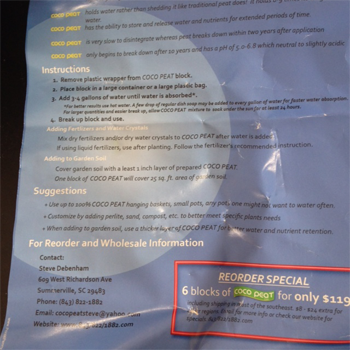 “But what can we do?

Let us know your thoughts on today’s issue.