With all the concerns over processed food and if it is good for you or not, one food item seems to have more debate about being processed than any other, milk.
Is raw or unpasteurized milk good for you or bad for you?

When I was very young I can remember being on the farm and watching my grandparents milk the cows. 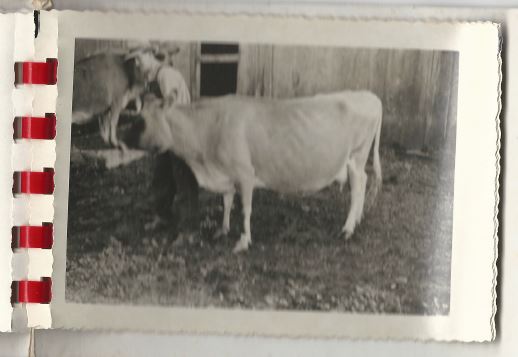 The milk cows would be lined up outside the barn door anxiously waiting to be milked. They would then come in the barn and go to their stalls or stanchions where a wooden bar would slide over about 15 degrees and a wooden block would be placed to keep the bar next to the cows neck and the head secured.

The cows always went to the same stall. Grain would be placed in an area where the cow could eat while the milking process started.  I can remember that the udders would be cleaned and then the milking machine would be strapped on and the process of collecting milk would proceed. 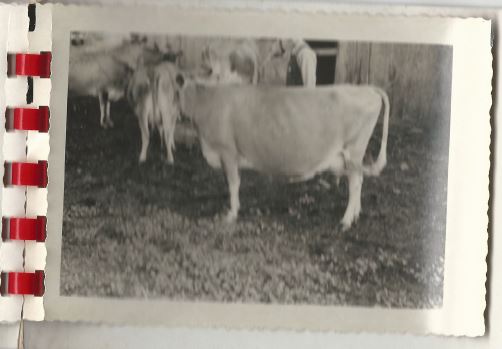 The milk would then be poured into a metal milk can. The lid would be hammered on and then the can lifted and placed into the cold water bath that would chill the milk until the milk truck came to collect the cans.

After my grandpa passed away and it was just my grandma doing the milking, she only would milk a cow for herself.  She would go through the same process except she would sit down on a one legged stool and milk by hand.  She was very good at it and very fast.  She could even aim and squirt milk into a cat’s mouth, which the barn cats loved.

Grandma would take the pail of milk into the farm house and place the milk in the refrigerator.  When we had milk to drink with our meals, the metal cups that we drank out of would have the cream globules along the side of the cups even though grandma had separated the cream from the milk.  The milk was never heated, just chilled and we would drink it.

I can remember in high school that I would go through gallons of milk a week.  We always had milk at school, everyone drank milk. 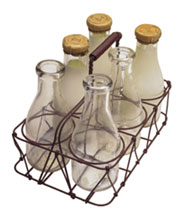 Times have changed, now instead of milk it is safer to have soda at school for kids to drink since they may be lactose intolerant.  I’m sure you can still get milk with your meals, I’m just not sure how many choose milk over soda.

But this brings me to my point, is milk the best choice?And if it is, should one choose raw milk (which is not available with school lunches) over pasteurized milk.
Few articles have I researched that have such strong opinions over the pros and cons of a subject as does raw milk.

The FDA and the CDC pretty much state that there is no reason to drink raw milk because of the harm it can potentially do to you.  Yet on the other side of the coin you can find arguments that state the benefits of raw milk and all the reasons why you should drink it.

As you can tell by some of my writings that I believe that natural is better than processed.  In this case I will let you form your own opinion.

I will start with what the Centers for Disease Control and Prevention or CDC and the questions they have with answers on their website then follow with rebuttals.

http://www.realmilk.com/
Weston A. Price Foundation:
“Real milk is milk that comes from pastured cows, that contains all the fat and that has not been processed in any way—it is raw and unhomogenized”

https://draxe.com/raw-milk-benefits/
Dr. AXE:
“Dairy products have gotten a bad rap over years because of the pasteurization process.  When milk is pasteurized it destroys many of the nutrients that make raw milk beneficial.
According to medical studies the following nutrients that are destroyed or altered during pasteurization include”:

CDC:
Many people believe that foods with no or minimal processing are better for their health. Many people also believe that small, local farms are better sources of healthy food. However, some types of processing are needed to protect health. For example, consumers process raw meat, poultry, and fish for safety by cooking. Similarly, when milk is pasteurized, it is heated just long enough to kill disease-causing germs. Most nutrients remain after milk is pasteurized. There are many local, small farms that offer pasteurized organic milk and cheese products.

http://www.realmilk.com/
Weston A. Price Foundation:
“It is very difficult to determine the risk of drinking raw milk on a per-serving basis compared to pasteurized milk and to other foods.  For starters, the risk of illness from all dairy foods, raw and pasteurized, is very low compared to other foods—amounting to only 1 percent of all illnesses.
A government document published in 2003 indicates that on a per-serving basis, deli meats are ten times more likely to cause food-borne illness than raw.”

Does drinking raw milk prevent or cure any diseases, such as asthma, allergies, heart disease, or cancer?

CDC:
No. There are no health benefits from drinking raw milk that cannot be obtained from drinking pasteurized milk that is free of disease-causing bacteria. The process of pasteurization of milk has never been found to be the cause of chronic diseases, allergies, or developmental or behavioral problems.

https://draxe.com/raw-milk-benefits/
Dr.Axe:
“Probiotics are only found in small amounts in raw milk but when you ferment raw milk to make kefir, yogurt or cheese the good bacteria dramatically increases.  In fact, there are no other foods in the world as high in probiotics as cultured dairy products.

Probiotics are microorganisms that line your gut and support nutrient absorption and protect you from foreign invaders like E. coli and parasites. The best way to include probiotics in your diet is in their most natural state, which includes raw milk products such as cheese, kefir and yogurt. Some disorders probiotic rich foods are known to help with include”:

My farmer’s raw milk is organic, so isn’t it safe?
CDC:
Raw organic milk is not safe. Pasteurized organic milk is available in many places, including supermarkets, farmers’ markets, and dairies.

http://nourishedkitchen.com/10-reasons-drink-raw-milk/
by Jenny:
“When you purchase pasteurized milk at the store – unless you’re careful about your brand – you’re purchasing it from industrial farms that promote poor health among their herd.
By contrast, raw milk is not produced on a massive, concentrated scale.   Instead, raw milk producers operate small operations with fewer cattle spread out over a larger amount of space.   Cows aren’t fed on feedlot grain; rather, they’re given space on fresh pasture and spend their time outside with access to shelter when they need it – as in the case of inclement weather.   By choosing to drink raw milk and eschew pasteurized milk, you’re supporting small, local farmers who value both their customers and their herd.   You’re supporting sustainable agricultural operations not the dairy mega-industry.”

As you can see, a difference in opinion exist.  I am not here to tell you to drink raw milk, that is a decision you have to make or the government probably has already made that decision for you.  If you are thinking about drinking raw milk, then be informed and know the risk.  When I drank raw milk on the farm I had my grandma looking out for my best interest, you will unlikely find that kind of love at the farmer’s market. 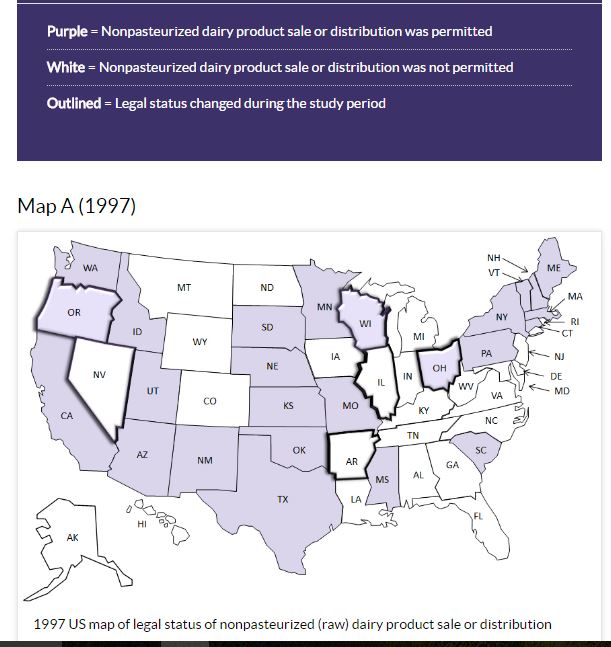 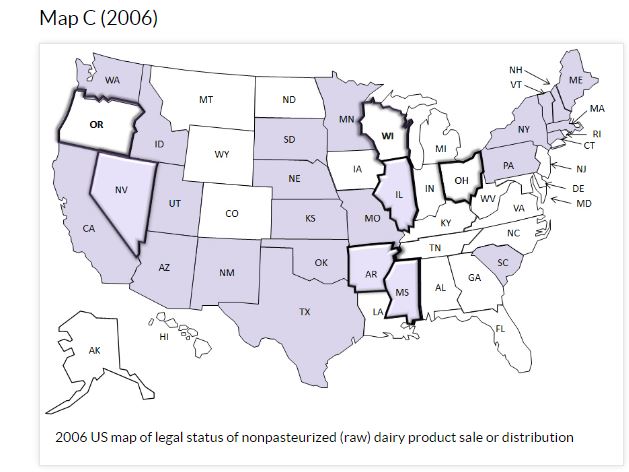 What are the risks associated with drinking raw milk? Raw milk can carry harmful bacteria and other germs that can make you very sick or kill you. While it is possible to get foodborne illnesses from many different foods, raw milk is one of the riskiest of all.

Getting sick from raw milk can mean many days of diarrhea, stomach cramping, and vomiting. Less commonly, it can mean kidney failure, paralysis, chronic disorders, and even death.

Many people who chose raw milk thinking they would improve their health instead found themselves (or their loved ones) sick in a hospital for several weeks fighting for their lives from infections caused by germs in raw milk. For example, a person can develop severe or even life-threatening diseases, such as Guillain-Barré syndrome, which can cause paralysis, and hemolytic uremic syndrome, which can result in kidney failure and stroke.

Let us know your thoughts on today’s issue. Post your comments here.
The link takes you to my blog site, click on comments at top of article.
Posted in Animal Husbandry, Health, Magazine Issues Tagged with: Raw Milk