Vermiculture is the raising of worms for use in composting, for bait, and the use of their castings for fertilizer.  The castings can be used to make worm tea, or just added directly to your plants as an organic fertilizer.

The most common worm that is purchased from a worm farm or supplier is the red wigglers or Lumbricus rubella.

These little guys are great for fishing and also do wonders for the soil.

These worms live just under the surface, ingesting soil along with organic matter and leaving tunnels that carry oxygen to the plant roots and improve drainage.

This activity breaks up heavy dirt clods, and the castings keep the soil loose.

The key to having worms is to have a place that keeps them happy and comfortable and to feed them. 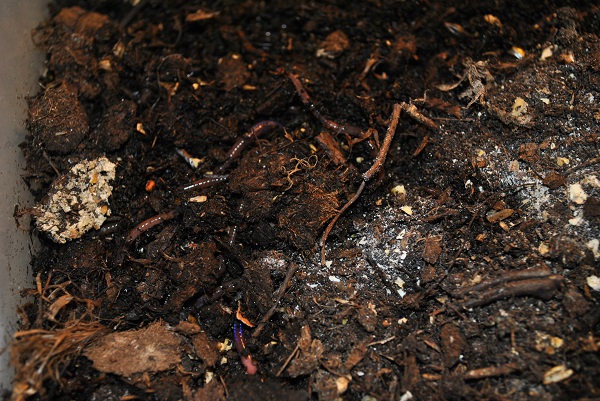 You can build a worm bin or purchase one.

I started with having a compost pile outside.

This is where I put the grass clippings, leaves, and kitchen scraps to be made into fertilizer.

You can use any wood or plastic container for housing your worms.

The key is to have one that breathes well.

Wood boxes tend to allow a constant supply of air, but plastic will work fine as long as holes are drilled for drainage and you stir in the air every few days.

You can use a storage bin and lid, but I would recommend that you not use the lid but instead place burlap on the top.

This will diffuse the light, help keep moisture in, and allow a good supply of air. 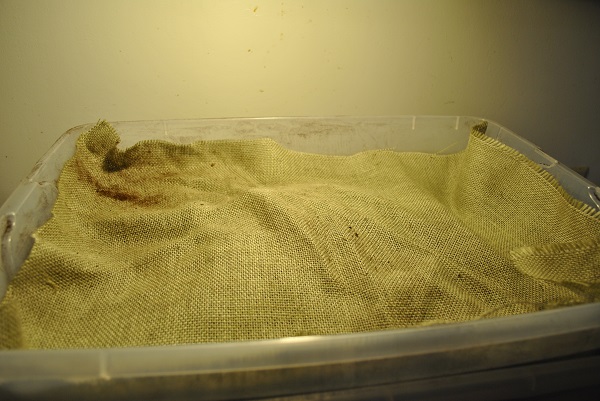 If your worm bin is outdoors, keep it in a protected area, out of the hot summer sun or cold rains in the winter. 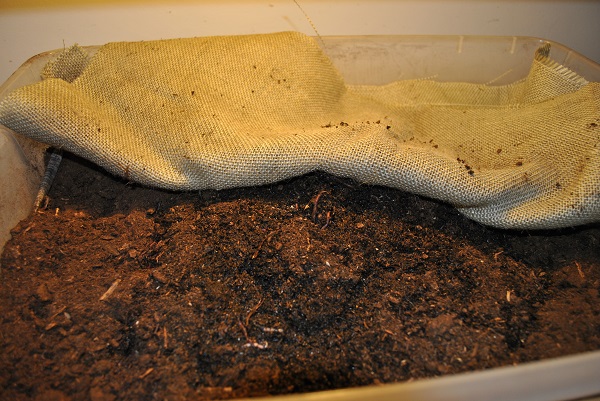 I turn the compost pile and worm bin every week so the decomposing of new additions to the pile or bin is enhanced.

There has never been a smell from the compost pile.

When I turn the compost, I see all sorts of worms.

This is the same compost pile I used to repot my jalapeno plants.

The compost is rich black soil, not like any other soil that used to be in my yard. 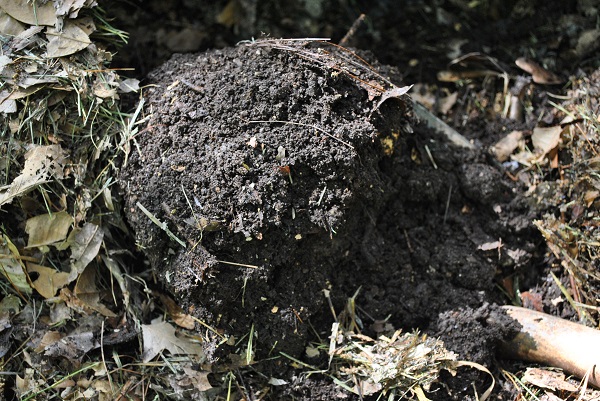 I use to have an indoor worm bin that I kept in the basement.

I would put coffee grounds and vegetables in that bin.

It is just about time to remove castings from this bin. 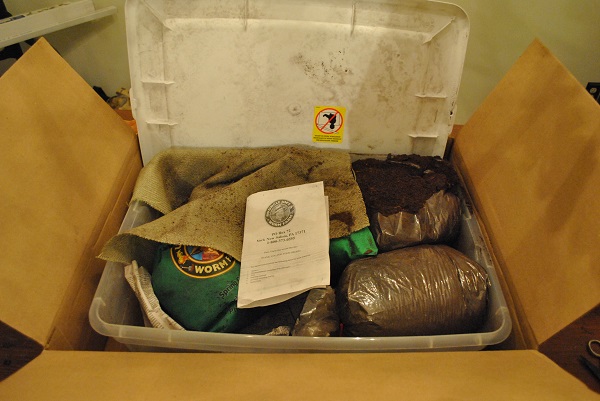 I used the bedding that came with the worm farm.

If you want to make your own bedding, newspaper, and corrugated cardboard that is shredded into ¼” to 1” strips, works well.

Place the strips in water then drain well.

You want them to be moist but not soggy. 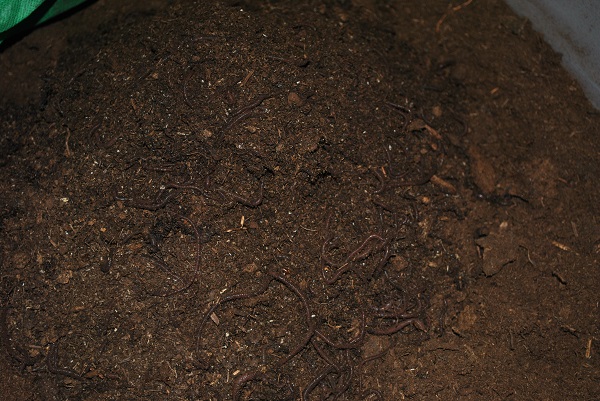 As the bedding disappears, replace it with new.

This is the process the worms go through in composting or vermicomposting.

Add a few handfuls of moist soil to the bedding.

This will help provide worms with the grit that they need for digesting their food. 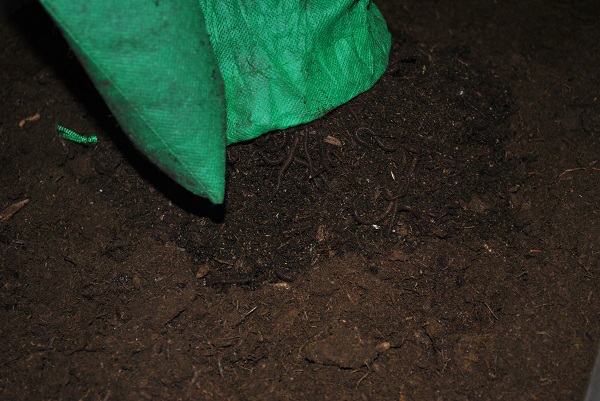 Now that you have your worms taking care of your organic waste material you can start reaping the rewards of the worm castings.

After about 6-12 months you will have enough castings to harvest in one of the following methods.

You can place a handful of casting in potting soil for your houseplants or around your vegetables and ornamental plants.

There will be worm eggs and a few young worms in the castings, but they will survive and enrich the soil.

If your population of worms has exploded, you can begin another bin with half the worms or put some out into your garden.

Remember the other part of having worms, is you always have bait when you want to go fishing. 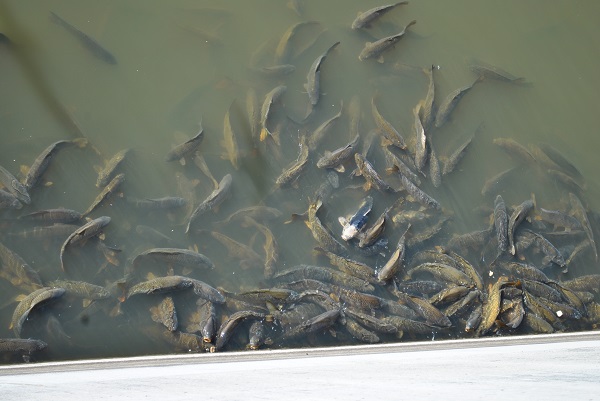 Fish Just Waiting To Be Caught

Having a worm farm is a win-win.

They don’t bark, they stay to themselves, your kitchen scraps and grass clipping do not go to the dump, and you will not have an excuse to not go fishing.

Plus if you have chickens, they love worms.

The Benefits of Using Worm Tea

by Yelm Earthworms and Casting Farm

• Worm Tea will out-perform chemical fertilizer. Increasing both plant size and yield. This is due to the interaction of Worm Tea microbes with the soil microbes and protozoa, soil particles, and the roots of the plant itself.

• Worm Tea used as an inoculant for potting soil will suppress airborne pathogenic fungi that can readily infect a sterile potting medium. The organisms in Worm Tea also produce hormones, vitamins, nutrients, enzymes, amino acids, and minerals needed by seedling cuttings and young plants. Inoculation should be done two weeks prior to planting.

•Worm Tea can remediate soil that has been damaged by agricultural chemicals. With the repeated application, the microbes will adapt to the soil as well as convert and metabolize organic and inorganic chemicals. They will also sequester heavy metals not required by plants.

• Worm Tea can treat lawns affected with thatch, which is a condition caused by sterility in the underlying soil. Chemicals usually cause sterility. Worm Tea will repopulate the soil with microbes, enrich the roots and break down the thatch turning it into food for the grass.

• Worm Tea applied to the soil improves water retention. Many of the microbes manufacture protective mucus that acts as a glue to agglomerate soil particles. Microbial colonies also make a bio-slime that is mostly water and is retained to protect the colony  The water retentive property of healthy soil can be 3-4 times greater than unhealthy soil.

• Worm Tea applied along with insoluble granulated or powdered minerals such as granite, limestone, rock phosphate, etc will supply 95% of everything the soil needs. The other 5% is organic material applied as mulch or litter on the surface of the soil or as dead root material under the soil surface.

• The microbes in Worm Tea turn organic matter into humus, storing energy for later use. This is the basic unit of soil fertility.

• The microbes in Worm Tea feed other organisms in the soil food chain.  Protozoa and nematodes feed on bacteria and fungi directly while worms ingest bacteria-laden soil particles. All life in the soil depends on microbes, directly or indirectly.

• Worm Tea applied as a foliar spray will act as a fertilizer.  Plants will produce more foliage and larger stems.  This is a good treatment for plants that are stressed or lack enough sun.

• Worm Tea applied to a compost pile will accelerate the breakdown of plant material reducing the amount of time to make compost. It can also be used to re-inoculate the pile after it has gone through its hot phase, which inactivates or kills many of the beneficial microbes. Re-inoculation increases the population of beneficial microbes, which continue to break down organic matter and form humus.